Lunchroom manager Cathy Walls-Thompson has witnessed the benefits of the act firsthand in the kids she serves at Hawthorne Elementary in Southeast Seattle’s Columbia City. The children have started choosing locally grown fruits, vegetables, beans and whole grains instead of French fries or tater tots.

“I encourage kids to just try it, and see what happens,” says Walls-Thompson. “Parents tell me all the time, ‘I’ll be doggone — my kids are eating salad now because of you!’” She adds that she’s lost 165 pounds by following the new guidelines.”

Bainbridge Island is everyone’s favorite part of Kitsap County, Washington. In the written epilogue of the 1996 hit movie, That Thing You Do! Guy Patterson and Fay move to Bainbridge Island, have four children and found a music conservatory where Patterson teaches jazz composition. Tom Hanks wrote and directed the movie, so I can only assume that his harrowing performance in Cast Away was inspired by his time on Bainbridge Island.

You must travel to Bainbridge Island by Ferry. The ferry is very safe, but if you would like to stand on the bow and pretend its the Titanic, the nice citizens of Seattle will just smile politely and walk around you. The ferry is so safe, it’s laughable.

View from the Ferry

Once you arrive on the island, artisan handicrafts and farm-to-table restaurants will overwhelm your senses. Portland has nothing on Bainbridge Island. It just doesn’t get any more homegrown local than Bainbridge.

In the mood for a pastry? Inhale a fluffy orange sweet roll with a buttery orange filling and sweet orange glaze from Blackbird Bakery.

Not hungry, but in the mood to learn about Japanese Interment camps in Washington State? Stop by The Bainbridge Island Historical Museum.

If you want to fit in with the locals, you’ll really need to ramp up your outerwear style. Head on over to The Wildernest and pick up some Mountain Khakis. 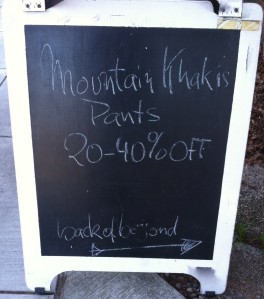 Locals in Bainbridge care about their look and will go to great lengths to maintain it. One local lost an item of clothing and posted a flier all over town to reclaim her beloved accessory:

The Eagle Harbor Book Company has an incredible selection and atmosphere. They also have a large section featuring local authors including Jack Olson, Susan Wiggs and David Guterson who wrote Snow Falling on Cedars.

If you want to spice things up, head over to one of the many kitchen stores and pick up some of Chef Marla’s Yiddish “Shit-arein” spices, which translated means, “to throw a little of this and a little of that.” They come in Dipshit, Horseshit, Shootin the Shit, Chicken Shit and Super Shit.

Bainbridge Island is a wonderful adventure for all ages. With beaches, parks, hiking, shopping and artisan goods galore, it is a special place in our world not to be missed. Although it is surrounded by water, boasts a median household income of $91,280 and 92.88% of it’s residents are white, Bainbridge likes to think of itself as a lady on the streets but a freak in the sheets.

Behold the wonder for yourself. On Bainbridge Isle.